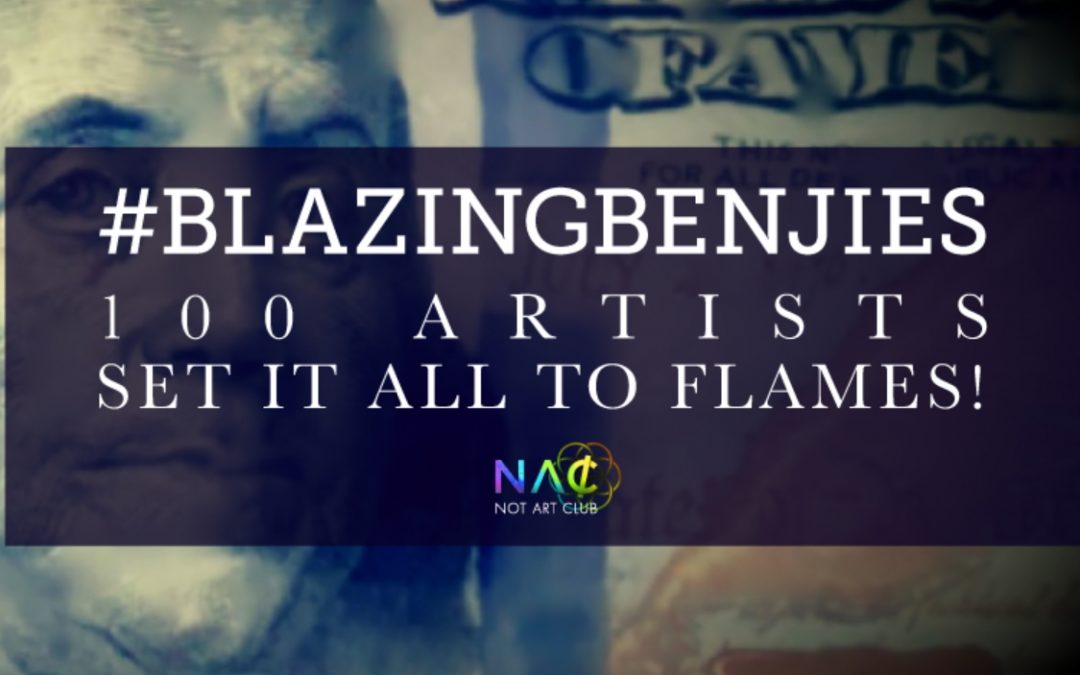 The NFT is called “The Last Bell”. The goal of the artists is to transform our concept of currency by turning this US $100 bill into 100 Ethereum through art. The equivalent of $220,000 at the time of this writing.

“We all need this community because I truly believe that everyone needs something to belong to, something greater than themselves and we all need a safe space to express who they truly are with like-minded people and it be received and reciprocated with compassion and empathy.” (Lisa, founder of NAC)

Questions about NAC and the $100 bill

How did NAC organize this project?
Organized by community governance on a discord chat server. Members were able to vote.

When did this NAC start?
Joined together March 21st 2021 on discord, after a Twitter post inspired the collaboration idea of “The Last Bell”.

Why did NAC start?
To sell one NFT art piece, created by 100 people, in a mosaic style. Topic and picture and name was yet to be decided. Later decided through community governance and voting.

How voting worked.
Members voted on important details such as:

What’s next for NAC?
Not Art Club plans to grow into a company that continues to mold the new emerging art market, and help eachother succeed across borders and mediums. NAC has the unique ability to share global perspective of artists at any given time. This will always be an asset to our growing community, where voices can be heard.  NAC is opening their previously private discord server to the public. Soon fans, friends, collectors, press and anyone interested to join may, may pop in to interact. Get involved with Not Art Club!  Check out www.notart.club for more! Visit our Gallery via that link for an array of different perspectives on currency and on freedom, from all around the world!

This website uses cookies to improve your experience while you navigate through the website. Out of these, the cookies that are categorized as necessary are stored on your browser as they are essential for the working of basic functionalities of the website. We also use third-party cookies that help us analyze and understand how you use this website. These cookies will be stored in your browser only with your consent. You also have the option to opt-out of these cookies. But opting out of some of these cookies may affect your browsing experience.
Necessary Altijd ingeschakeld
Necessary cookies are absolutely essential for the website to function properly. These cookies ensure basic functionalities and security features of the website, anonymously.
Functional
Functional cookies help to perform certain functionalities like sharing the content of the website on social media platforms, collect feedbacks, and other third-party features.
Performance
Performance cookies are used to understand and analyze the key performance indexes of the website which helps in delivering a better user experience for the visitors.
Analytics
Analytical cookies are used to understand how visitors interact with the website. These cookies help provide information on metrics the number of visitors, bounce rate, traffic source, etc.
Advertisement
Advertisement cookies are used to provide visitors with relevant ads and marketing campaigns. These cookies track visitors across websites and collect information to provide customized ads.
Others
Other uncategorized cookies are those that are being analyzed and have not been classified into a category as yet.
OPSLAAN & ACCEPTEREN